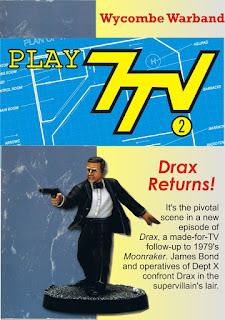 It's the pivotal scene in a new episode of Drax, a made-for-TV follow-up to 1979's Moonraker. James Bond and operatives of Dept X of MI6 confront the insidious industrialist and his new-found allies at the supervillain's lair.

It was also a participation game by Wycombe Warband for all to enjoy at Vanquish 2018.

In 1979, according to MI6 files, an Insidious Industrialist's dastardly scheme to replace all humans on earth with his chosen master race failed. Its mastermind, the multi-billionaire Hugo Drax, met an ignominious end, shot by 007's cyanide-tipped dart and expelled into space. And so, with his death, the case files were labelled with the name of the space shuttles so crucial to their plot and filed under M for Moonraker.

It is not wholly clear how Drax survived the cyanide or the vacuum of space, let alone re-entry through the earth's atmosphere or the shark-infested waters of the Indian Ocean into which the wreckage of his space station fell. But against all the odds, in a way that can only happen to principal or significant supporting characters in such films, survive he did, to be picked up by agents of a mysterious organisation which, it turns out, had been keeping watching over Drax and his enterprise all along. The Supreme Headquarters of International Villainous Agents (SHIVA), in return for his loyalty, vast financial backing, and the secrets of the chemical agent Black Orchid, duly nursed Drax back to health and gave him a position of some responsibility in their own organisation.

This all provides an unlikely, though not completely implausible, premise for a possible film sequel to 1979's Moonraker or, at the very least, a TV mini-series, and Channel 7TV2 was quick to take up options.

Using the 7TV2rules,  we ran the above game several times through the day at  Vanquish 2018.

The idea was to introduce newcomers to wargaming and the 7TV2 game, as well as to meet gamers from other clubs and encourage new recruits to our own. The episode was run as a participation game, with players taking on roles within Dept X and MI6 in a mission against Drax and his horde of minions. I ran the bad guys, with a few minor tweaks to the rules for the purposes of the scenario. The challenge was all about the good guys completing the mission they were given.

As we all know it's the look of the game that first draws people in and so the set was built with that in mind. I will post separately on how the set was made but essentially it was a bespoke base cloth and six modular elements, plus an open section of rooms, a helipad and radio mast, all of which was finished off with furniture, scatter terrain, two jeeps and a helicopter.

I provided some background material for the players in the form of a manilla envelope containing case files, which was given to players and others who were interested, containing:

Players were given a quick run down of the essential game mechanisms and then made selections from a choice of gadget cards. Then a specific mission for the episode was chosen by drawing a random card from a set of bespoke mission cards (fronts and backs here) that I made for the event.

Here are some stills capturing some of of the highlights of the day's filming during the filming of various different takes of the episode. Apologies for the poor quality of some of the photos!


I am consistently impressed with 7TV2. It is really clever how these rules create those cinematic moments and cliffhanger scenes so well. Also, there are very few wargames that can take brand new players who are completely unfamiliar with the rules and play a game to a conclusion in an hour and a half.

And in summary, people enjoyed the game and went away happy, and it was a very successful day.

Now to plan for next year...

Posted by Komrade Baskivich at 04:50